IUD’s are T-shaped plastic devices placed in the uterus and provide long-term birth control. Some have hormones at varying doses and one (Paragard) is copper and has no hormone. They can be used in women of all ages. They can be removed at any time, followed by a quick return to normal fertility. They can also be used while breastfeeding, and they don’t carry the risk of side effects related to birth control methods containing estrogen, so can be used in women with medical problems such as high blood pressure, migraine headaches, and smokers.

Mirena IUD – has the highest hormone level of all the IUD’s. This is a progesterone hormone that is slowly released in the uterus to prevent pregnancy for up to 5 years. It works by thickening the mucus in the cervix to stop sperm from reaching or fertilizing an egg. It also thins the lining of the uterus and partially suppresses ovulation. 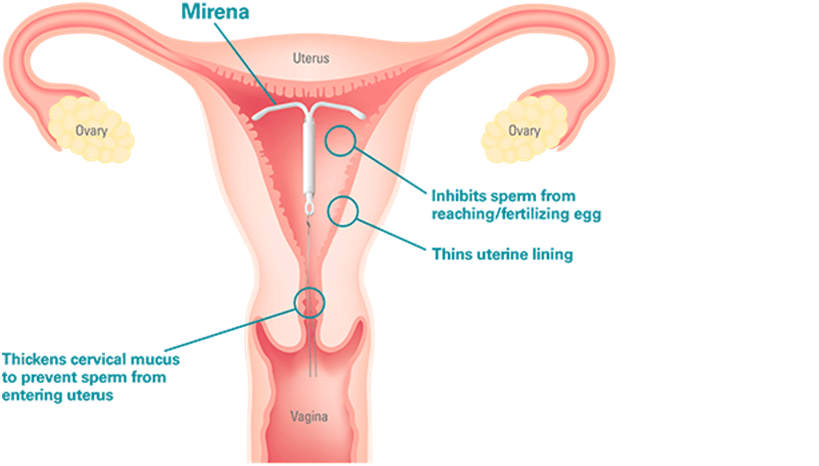 For the first 3 to 6 months, you may also have frequent spotting or light bleeding but once your body adjusts, your bleeding decreases, and your periods may stop altogether.  By one year at least 1 out of 5 (and up to 60%) of users have no period at all. Once it’s placed, just do a monthly thread check to make sure it’s in the correct position. Dr. Fleming will explain how. If you don’t feel the threads or feel more than just the threads, call our office as Mirena may not be in the right position and may not prevent pregnancy. Use non-hormonal back-up birth control (such as condoms and spermicide) until Dr. Fleming can check that Mirena is still in the right place.

Your periods will return once Mirena is removed.

Benefits of Mirena include:

Side effects with Mirena are uncommon but may include:

Kyleena and Skyla IUD’s: are made by the same company as Mirena, but have less hormone and are slightly smaller. Skyla has the least amount of hormone and works for up to 3 years. Kyleena is between Skyla and Mirena and works for up to 5 years. These IUD’s may be an option for patients with smaller uteruses and those who would like some benefit of reduced period cramps and less bleeding, but want to limit hormones. They will, however, not have as much of a benefit as Mirena.

Paragard (copper) IUD: is a T-shaped plastic IUD that has a copper wire coiled around the device, produces an inflammatory reaction that is toxic to sperm and eggs, preventing pregnancy for up to 10 years after insertion. The most common side effects of PARAGARD are heavier and longer periods and spotting between periods; for most women, these typically subside after 2 to 3 months.

IUDs should not be used if you have:

When can your IUD be inserted:

Call Dr. Fleming if you have any of the following:

IUD removal: Dr. Fleming will use forceps to grasp the device’s strings and gently pull. The device’s arms will fold upward as it’s withdrawn from the uterus. This is usually very quick and well tolerated. Light bleeding and mild cramping are common during removal. Rarely, removal can be more complicated.

Please see Dr. Fleming near Boston, MA for a consultation to determine which IUD will be best for you based on your concerns and preferences, as well as your medical history. She will check your blood pressure, your weight and review your medical history and medications you’re taking and together will choose a method that is best for you.

For general questions please fill out the form below and someone from our office will be in touch with you shortly.

* Do not send personal medical information in your message.
* All fields are required

Conveniently located at Playhouse Square at the corner of Forest Street and Washington Street in Wellesley, MA.